There are no adorable kids learning and playing at its daycare center.

Anthony Jones (left to right), Ashley Wright, Major Terry Wood and Jamie Moses stand outside the Salvation Army Kroc Center in Camden as trucks are loaded with boxes of food for those in need. (Photo: Phaedra Trethan)

There wasn't even a ripple in the water of the indoor pool; nets were removed from the outdoor basketball courts and the blackbox theater, normally used for events, was instead filled with pallets and boxes of food. A small group of volunteers packed bags and boxes, filling shopping carts with necessities. Outside, a few masked people waited in front of the main entrance, separated by several feet.

There was activity in the back of the Harrison Avenue complex, too: Boxes of food, labeled with the Salvation Army logo and slogan ("Doing the most good") were being loaded into SJSL Specialty Transport vans.

The Mount Laurel-based company normally offers a variety of transportation services: student busing, funeral and limousine service, and non-emergency medical transport. With many of those services on hold now, though, owners Ashley Wright and Anthony Jones wanted to keep their employees working, and their business afloat.

Working with LogistiCare, an Atlanta-based transportation management firm that contracts with them to bring patients to doctor's appointments, and with the Salvation Army to get food to those who need it — people who've lost jobs due to the COVID-19 shutdowns, people who can't leave their homes for fear of contracting the potentially deadly virus, people who normally go to food pantries but lack transportation of their own.

Wright and Jones, a married couple from Collingswood, are members of the Kroc Center, so it was a natural fit for them to help its mission, Wright said.

"LogistiCare asked if we wanted to do food deliveries and we have multiple vehicles available, so we wanted to help get food to families who need it," she said.

"It's overwhelming when we see the faces of people when they get their food," she said. She talked about smiling children and grateful parents, people who told her, "This is such a blessing."

The company has 14 employees, and while SJSL has had to reduce some of their hours, they have been able to keep everyone employed.

Most of the deliveries are in Camden and Pennsauken, but the Salvation Army will assist anyone, regardless of where they are or who they are, said Maj. Terry Wood, the center's administrator. Households in Merchantville, Maple Shade and other Camden County towns have also received deliveries.

LogistiCare was a provider for the State of New Jersey for non-medical transportation before the COVID-19 outbreak; now it works with the state and its network to deliver food.

"It's during a crisis when we see people really coming together," said Jamie Moses, LogistiCare's national sales director.   "The partnership with the Salvation Army shows how much the community comes together in times of crisis; it's a whole ecosystem here" that also includes the Food Bank of South Jersey, corporate donors including Campbell's Soup Company and others.

LogistiCare, which works with Medicare and Medicaid to assist clients, now works with the state to bring food to seniors and those facing health issues that may make going out too much of a risk, said Moses. 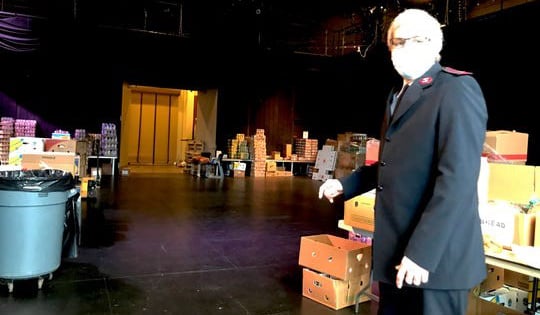 Major Terry Wood, administrator of the Salvation Army Kroc Center in Camden, shows how the facility's black box theater has been transformed into a makeshift food bank. (Photo: Phaedra Trethan)

"We're doing about half the volume we did before COVID-19," Moses said.

"We saw a need to use our excess capacity for good. This plays a huge part in keeping our transportation network going, keeping our partners healthy and going during this crisis."

The Kroc Center originally offered a choice food pantry, Wood said, but that was discontinued due to safety concerns. Now, people who need food can leave the Kroc with a cart full of meat, produce, shelf-stable foods and other necessities; they can also get food delivered if they're unable to leave home.

Since the coronavirus forced the closure of non-essential businesses — and brought about a mostly shut-down economy — the Salvation Army has seen a 50 percent increase in the number of people seeking assistance for the first time, Wood noted.

"Many of them have never had to ask for food. They've never been out of work. They don't know where to go," he said. "We're here to help anyone who asks for it."

Wood noted that Moses had another, more personal reason for pitching in to help.

"Jamie had a neighbor who wasn't able to go out, but had a need," he said. "He had a thought, and he acted on it, and here he is. So please, if you have a thought, act on it. It will have an impact."

The Salvation Army has information on its website at www.camdenkroccenter.org/index.html. Emergency food service is available by calling 856-379-4871. To donate, visit the website and click on the "DONATE" button.

Phaedra Trethan has been a reporter and editor in South Jersey since 2007 and has covered Camden since 2015. She’s called South Jersey home since 1971. Contact her with feedback, news tips or questions at ptrethan@gannettnj.com, on Twitter @CP_Phaedra, or by phone at 856-486-2417.